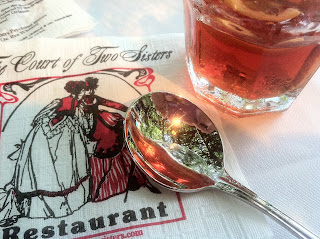 Oyster poor boys, an ironic silent movie on a jazz performer and a man intent on sharing his medical records with me in Jackson Square were among highlights of my whirlwind tour of New Orleans. I also met Beignet, a dog sporting a sombrero. Don’t judge him. It was Cinco de Mayo, and it was Bourbon Street.

I was also wearing a chapeau I’d just scored at Wicked Orleans, or what I’d call Home of the $12 Fedora. Everybody and their mama was browsing for hats in the midst of a shop featuring a sexy mannequin in fleur-de-lis lace stockings, leather and horns. The grandmotherly-type sales woman wore a long denim skirt and had her white hair piled high atop her head. She seemed out of place, but the French Quarter has a way of mixing things up. She said she couldn’t wear the fedoras, as they’d mess up that hairdo.

Here’s more of what I experienced:

* Ever seen Frank Sinatra Christmas ornaments? Santa’s Quarters featured baubles resembling the singer’s name on a marquis with extra wording such as “Ol’ Blue Eyes” and “Confidence is King.”

* My splurge meal was at The Court of Two Sisters, under a wisteria bush the waiter said was about a hundred years old. I don’t recall what wonderful things I ate, because I began with a sazerac, the official cocktail of New Orleans. Okay, it tasted a bit like cough syrup, but cough syrup in The French Quarter is a pretty good thing.

* The National Park Service offered a lecture on a jazz musician. I took a break from walking the Quarter and heard a great talk and saw a silent film on the jazz player. How ironic. You could tell who else in the crowd were tourists. Visiting women like me had sunburned feet.

* The ferry to Algiers is free and fun. I rode it in the daytime and again in the evening. The lights in the city were beautiful.

* We were plucked from a long line at Acme Oyster House and told we could get seats at the bar, if that was okay. Mais oui, it was. The fried guys were great. Restaurants offered a lot of char grilled-on-the-halfshell options. That seems safer than raw, and nearly as delicious.

* What’s New, a shop on Decatur Street, had a window display of actual plates that looked like cheap paper plates and mats that looked like newspaper. The effect was a common man’s crawfish boil with a classy flair. It was kind of cute, but aficionados will eat crawfish right out of the box.

Posted by The Port Arthur News at 5:39 PM