A Walk in the Woodlands 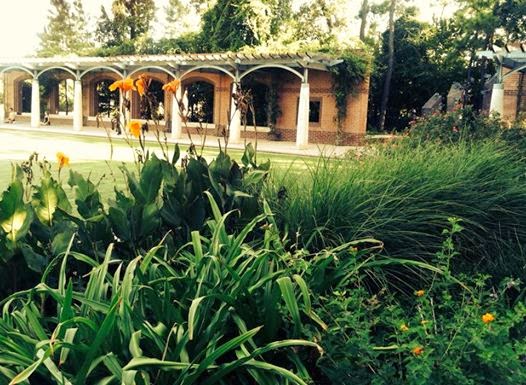 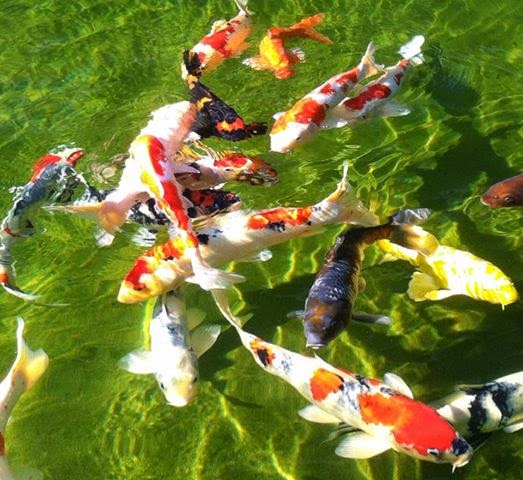 If you think you are in The Woodlands, you may be in Shenandoah. Find their visitors center and be aware of the pleasant distinction. The two cities bump up to each other, but the Shenandoah’s Visitors Center will also give you the bonus of a display on David, known as The Bubble Boy, whose diffencies kept him living in a bubble. Stories are on the wall and a case holds some of his toys. I got the story straight from a worker who said her son played checkers with David through the bubble.
If you know you are in The Woodlands, you’ll probably be near the mall and the water, where you can shop and dine and catch concerts at the Cynthia Woods Mitchell Pavilion. I had not been to this area since I was supposed to see Christopher Reeve recite a piece to music. He had just been thrown from the horse in the now-famous incident and Lou Gossett Jr. took his place.
Now, I got to see the area in the daylight.
Sampling Cycler’s Brewing beers from Montgomery, Texas, was a fun experience I stumbled upon. I enjoyed the Breakaway with a flavor profile of grapefruit and a slightly pine backbone. Seriously, these varieties, such as Domestique Wit and Ryed Hard, all have a bicycle theme.

A koi garden refreshes your soul, I don’t care who you are. I strolled down water way leading to Town Green Park in The Woodlands on a Sunday morning, noting walkers, joggers, dog walkers and yoga people. Flowers and the bees who love them, sculpture and the side attraction of koi tumbling over water lilies were natural bonuses in this peaceful area of beauty.
Ironically, The Woodlands is considered a ritzy area, but I stumbled upon all this fun at no extra cost.
ddoiron@panews.com
Posted by The Port Arthur News at 4:22 PM No comments: 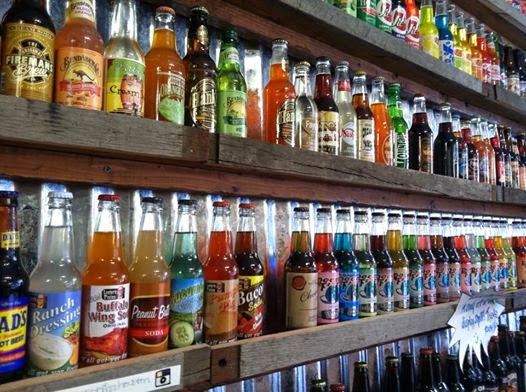 Oh, the things you can do when the kids are out of the house. My husband heard a cousin from the valley would be in Houston, we were suddenly able to meet them at an ice house. We (almost) picked up and went, just like that. Okay, we did have a little shifting to do, but it was worth it.
We shared some ribs, because we wanted to eat Asian food on the way out. Squid, it was. But on the way, we stopped at Torchy’s Tacos for a snack. We shared it all, so we didn’t super-over-indulge. A treat is a treat, and we should all get them.
I

Rice Village is a must stop in Houston. Half Price Books gave us a nice bit of cash for the anime books my daughter left in her room. Of course, they offer an abundance of art, food, fashion and travel books for you to leave with. It’s a trade.
Blue Elephant a boutique in the village, made me a mimosa and fed me a fresh-baked chocolate chip cookie while I shopped. The clerk pointed out Rewined candles what smell like sangria, chardonnay, etc. The thick, green holders are made from cut-off wine bottles. It’s recycling at its most fashionable.

Pucker up for Rocket Fizz, 2413 Rice Blvd., where I saw people three generations of sweet-lovers discussing their favorite, long-lost brands. Well actually, some of them never went away, or are completely new sugar highs. The man behind the counter said his customers are taken back to their childhood with Sugar Babies, cream sodas, metal signs with ‘50s brands and all the fun an innocence of heading to the candy store with change in your pocket.
There’s always something new to see in Houston. I’m planning my next trip. Or, leaving it unplanned.
ddoiron@panews.com
Posted by The Port Arthur News at 4:06 PM No comments: 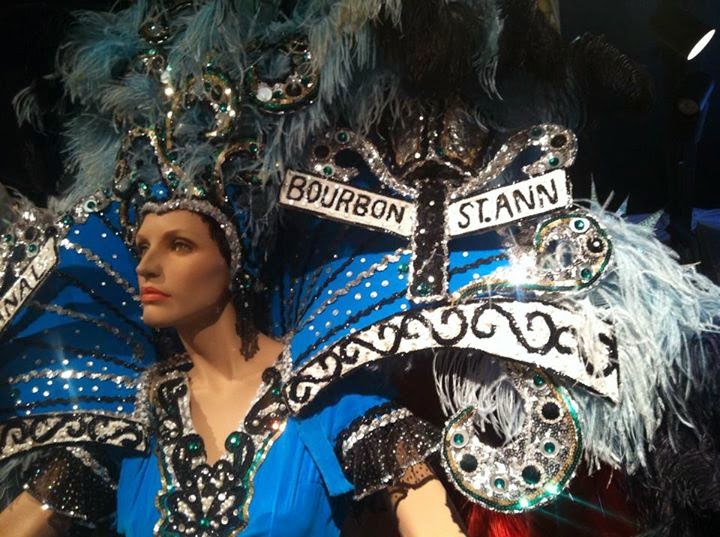 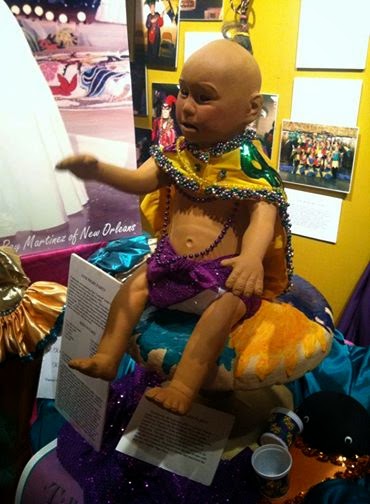 Ever hear of the fire of 1910 that destroyed much of downtown Lake Charles, La.? Ever heard an animatronic baby tell you what it’s like to live in a king cake? Shared your bucket list on a city wall?
Those are some of my highlights of time in Lake Charles this summer. Once you go over the bridge featuring crossed dueling pistols, you can get into bunches of fun that doesn’t even involve slot machines.

I learned about the Great Fire of Lake Charles at the Historic City Hall Arts & Cultural Center and retold fascinating details to several people who, like me, had never heard of this dramatic change of landscape. Perhaps it started in an alley behind the opera house. Wonder what 1910 opera house clientele would have thought of the casinos that bring so many visitors to their city now. The hall also featured Southern Mythology, works by Mark Messersmith that combine large and colorful swampy-type birds of our coast with canvases topped by intricate cut outs and bottomed by inset boxes of individual scenes. Photos were forbidden, so go see for yourself through Aug. 23.
No one minded as I snapped pictures of the classic white steps in the Calcasieu Parish Courthouse. It’s getting a remodel inside. The only person who noticed me admiring the massive white columns was a woman making her exercise rounds. What a historic place to work out.
Shops and restaurants in the downtown area have chic, artsy fare. I noticed I was walking on colored chalk pieces and looked at a massive brick building with a giant chalk board inviting people to scribble what they’d like to do before they die. One said to eat boudin. That’s a great goal, though I would have spelled it boudain.
Cathedral of the Immaculate Conception has always been closed when I’d tried to see it before. I pulled on the door the other day and it came open. There was rosary and confessions going on, but no one stopped this quiet tourist from subtly snapping photos of the magnificent stained glass. They know they have something to admire.
Sequined costumes with themes from Darth Vader and Ben Hur to carnival snacks and Lindburgh’s flight await visitors to the Mardi Gras Museum of Imperial Calcasieu. My mouth was hanging open throughout most of the visit, as each room yielded more sparkle. I noticed a door frame was made to look like you are walking through a king cake. On the other side this big baby display began speaking to me about the tradition. That’s just one of the Lake Charles experiences I won’t forget.
I will also report that L’Auberge du Lac is as appealing as ever and The Golden Nugget looks ready to go, set to open by the end of the year.
Here’s my report on lovin’ Lake Charles.
To plan your fun time, go to VisitLakeCharles.org.
ddoiron@panews.com
Posted by The Port Arthur News at 4:37 PM No comments:

The Sunday Afternoon Cake
White Chocolate Cranberry Cheesecake qualifies, as does Mississippi Mud Cake with marshmallows, pecans and chocolate drizzles on top. I need something called Baklava Cheesecake.
This is not to say I wouldn’t enjoy Poundcake from Heaven on a Sunday, but it’s not in the Sunday Afternoon Cakes section.
I suppose you can allow yourself to skip around, beings as you’re already into the nuts, sugars, creams, berries and caramels.
Of course you can trust the this new book because it’s from Southern Living. “The Southern Cake Book” will not steer you wrong. Ideas are on every page. Don’t know why, but I hadn’t thought of baking a raisin into the king cake to represent the baby, and cut down on choking hazards. Here’s another idea, gelatin can flavor your frosting. That’s why I picked just this one little old frosting recipe to share from this amazing book. Here it is:

Strawberries and Cream Frosting
Stir together 1 tablespoon strawberry flavored gelatin and 2 tablespoons boiling water in a small bowl. Cool completely, about 20 minutes. Beat 1 cup whipping cream and gelatin mixture at high speed with an electric mixer until foamy, gradually add two one fourth cup sugar, beating until soft peaks form. Stir in 1 8-ounce container sour cream, one fourth cup at a time, stirring just until blended after each addition. Makes about three and one half cups.

Purple time(er)
Somehow, the Taylor Classic Slim Timer seems both modern and old school. My purple timer magnet is a little thicker than a credit card and can go from room to room as you time your exercise or cake baking time (see above entry) or when it’s time to take a break and eat rum candy (see below entry). Sure phones can do this, but this Taylor quickly gets you to just the basics and it’s handy. You can get one with a whiteboard for scheduling your week. This is a great locker perk for back to school. A little timing is a great motivator. Check into it at Amazon.com

Say “Aye” to rum
Rum Coconut Patties new from Anastasia Confections. Look for the parrot with the pirate’s hat and hook on its wing. Cool Bites in resealable foil pouches are on the way. Of course, you could go to Florida for yours. The Orlando-based, family-owned company has been making sweet treats for years and boxes go home as souvenirs. I’m enjoying the rum flavoring. Wonder what took them so long?
ddoiron@panews.com
Posted by The Port Arthur News at 5:27 PM No comments: