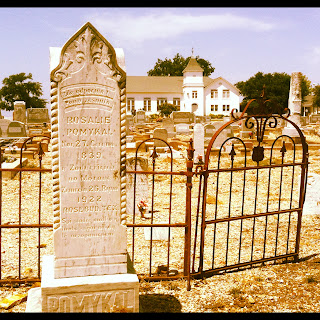 I love seeing miles and miles of Texas, and just rounded out a road trip along Texas105 to the heart of it all. With hay rolls, cattle clusters and the mandatory cemetery stop, the only thing that could have made conditions more perfect would have been cool, fall weather. I was rewarded with a rainbow as I approached Southeast Texas.

I got In a treat at the Texas Stop Sign, or Dairy Queen as I call it when I’m not on the road. A mini Georgia Mud Fudge held me from Belton to the barbecue stop planned for later in the evening.

I made it to Killeen in back. I saw for myself that it’s true what they say about Aggie maroon in the Bryan/College Station area. The Whataburger had a strip of maroon on its angled roof to offset that orange design. They wouldn’t want to be mistaken for Longhorn fans.

After agreeing with Texas Monthly that Schoepf’s in Belton puts out some great barbecue, I tried to keep up with the Electric Slide dance at a concert in their big open-air picnic yard. Earlier, I rode a golf cart to Real Deals Home Décor, where I picked up a vintage-look hook, but resisted a plaque bearing the sentiment “Life is a cabernet.”

The sun was beating down on Ocker Brethren Church Cemetery near Rosebud. It’s attached to a lovely wooden church and the markers show Czechoslovakian heritage. Little beds filled with gray pebbles surrounded markers. So this is how they do it where there’s less water around.

The old depot visitors center in Hearne was a step back in time, and the woman there directed me to Toodie’s Barbecue, across the road. The ribs were as good as she promised, and I took a window seat. The busy road was a few feet away and every other mouthful I took I’d hear a roar, then feel cooler temperatures. The 18-wheelers that whizzed past would block out the sun.

I hope everyone had some good road trips this summer. As good as it is to go, it’s always good to get back home to Southeast Texas.

Posted by The Port Arthur News at 5:57 PM