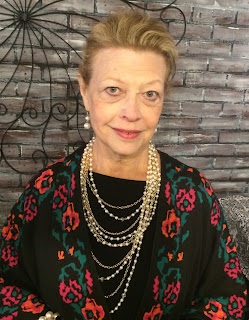 The Courtyard Café was packed for Fashions in a Nutshell, the Gulf Coast Sertoma Club’s style show to promote the upcoming Pecan Festival, Nov. 5-8 in Groves.
The show included looks from Hannah Bay’s Shoogz and Oliver Maxwell’s featuring lots of splashy, long vests with a boho-chic look and fitted dresses with belts, collars and dots that put at least three women at one table in the mind of Lucille Ball. That’s timeless class, right there.
So this fashion show had tons of prizes and I walked out of there with a bowl made to look like bent spoons as well as an infinity scarf with bright colors and chevrons.
Terry Jackson announced the looks and modeled a colorful pancho-like vest in a bright pattern of florals. She is a Sertoman who also works at The Courtyard, so she was truly “representing” at the Sept. 19 show.
This group raises funds so it can give right back to the community. They raise money so they can give it right back out to groups such as Capland Hearing Center.
One of the style show perks that kept on giving was a free gift from The Collection, right across the street from the show. I got a BLT dip mix that will be on a fall menu pretty soon.
Norma Jordan and Linda Foster are two Sertoma members who are interested in the community and getting people interested in joining their group.
darraghcastillo@icloud.com
Posted by The Port Arthur News at 10:58 AM